Skip to main content
Analysis: We are led to believe that the Arctic will be a bonanza for oil and gas. There are four simple arguments why this won’t be the case. 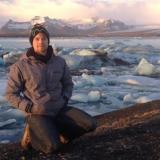 We are led to believe that the Arctic will be a bonanza for oil and gas. There are four simple arguments why this won’t be the case.

The Arctic is experiencing an extraordinary heatwave – it’s 20°C warmer than usual at this time of year (just imagine London or New York having T-shirt weather in winter). So does this mean the region’s fabled energy resources will finally be exploited? Will newly ice-free sections of the Artic Ocean soon be peppered with oil rigs, like a cold, remote North Sea or Gulf of Mexico?

Not quite. The Arctic’s offshore oil and gas is in very deep water, literally as well as figuratively, and will likely remain untapped. Many people expect a huge energy bonanza, while others are anxious about environmental destruction or international conflict over polar seas. But these views are largely based on various myths.

This figure is drawn from seismic surveys, however, where blasts of sound from an airgun are bounced off underground rocks in order to identify likely spots containing oil and gas. None of these reserves are proven until they are actually drilled.

In any case, most of these reserves lie offshore, typically 2km to 4km below the seabed, in variable water depths and environmental conditions. Given the very slow pace of drilling in the Arctic, it will be a very long time before the real picture is known.

Unlike the Antarctic, which is uninhabited and protected by an international treaty that prohibits mining, the Arctic has always been exploited. Around 4m settlers and indigenous inhabitants now live there, spread across eight different countries. Population growth seems to rise in line with new resource extraction projects.

Of course, just because the Arctic isn’t entirely pristine doesn’t mean it’s invulnerable. Oil and gas exploration and extraction could devastate the region’s fragile ecosystem as well as the livelihoods of those who rely on it. Most concerns about oil and gas activities raised by the Conservation of Arctic Flora and Fauna are not based on what we know about potential impacts but what we don’t know about the resilience of the environment.

Could the Arctic’s reserves be ripe for picking once oil prices rise again? Unlikely. In addition to the cost of drilling at such depths, studies have highlighted the financial and reputational risks of an oil spill.

In colder temperatures, it’s likely that water and oil would freeze and become part of the ice and permafrost, lingering in the environment for far longer than oil spilled in the tropics. We still don’t know exactly what happens to oil spilled in the Arctic – but no one wants to find out.

BP’s catastrophe in the Gulf of Mexico cost the company a whopping $18.7 billion. The cost of a potential “oil Chernobyl” would be enormous.

This is unlikely. Most untapped resources are already located within the offshore economic zones of nations who either claim parts of the Arctic Ocean or have claims well underway. Arctic countries have long declared their commitment to an “orderly settlement of any possible overlapping claims” according to the United Nations Convention on the Law of the Sea (UNCLOS), which makes land-grabbing unlikely.

The Arctic really is melting

This one isn’t a myth – it’s all too real. Arctic warming may sound appealing for oil and gas companies who gain longer periods of access to the ocean, but the impact of thawing sea ice and permafrost on human and natural life may be devastating and “completely irreversible”.

No wonder activists are protesting against energy companies who plan to drill in the region. With high moral stakes involved, and a global commitment to keep warming below 1.5°C, new offshore oil and gas activities in the Arctic look unethical – and unrealistic.

The author, Michael John Laiho, is a PhD researcher at Durham Energy Institute at Durham University.
This article was originally published on The Conversation and in The Arctic Journal.