“Cruise, cruise, cruise”, cries the Bodø city seagull. It knows that garbage is on its way and is looking forward. 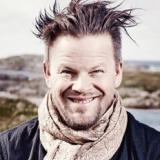 The fact that food comes easily doesn’t go unappreciated; the hard work that its forefathers had to put in to get food in their tummies is not something the city seagull would particularly want to experience.

Imagine having to live around the outer islets – ‘no sir’eee, that’s not for meee’. You’re no diver, and even if you were, you’d’ve had to race it like a razorbill in order to survive. Besides, the razorbill’s diving abill-ities (get it?) would still not guarantee your survival. Greedy humans would most likely have been there before you. Hunting for food, or was it profit?

Salten and Helgeland are unknown international tourist destinations compared to Lofoten. The content of the concept “sustainability” is currently being discussed by various different authorities in Nordland county. The Salten and Helgeland regions wish to take over from Lofoten as successful destinations, and indeed possess all the necessary qualities to make this a reality. All of this produces, however, a loud beeping noise in my head. Are the Bodø enthusiasts likely to end up making decisions that unload nature rather than load it, considering how burdened down it is already? Considering – and this is easy to forget – how nature is always global, and not just local? Are they likely to end up using the notion of “sustainability” as something more than a purely cosmetic label?

Someone has to work up the courage to make decisions, for the benefit of life in the year 2035, or even further into the future. Lofoten has not succeeded – the islands are currently overflowing with people and garbage, and the local authorities are not managing to keep it under control. We love showing off what we have, but when there are too many visitors, both nature and the local economy cease to be able to absorb all of the rubbish, that’s just how it is.

What if we took the concept of “sustainability” seriously, by banning cruise ships, by preventing tourists from roaming the mountains without certified guides, by implementing a total ban on rib boat tours? What if fishing tourism were allowed only if the rental company offered Nordland boats? What if all hire cars were to come with compulsory drivers-cum-tour guides in order to better control traffic? How about a total ban on mobile homes? And how about banning acquaculture in some areas, simply because they ruin an otherwise pretty photograph, thereby lowering the likelihood of returning customers in an industry which is, after all, when sufficiently controlled, more sustainable than acquaculture? Let this list boil over before we reduce it.

The tourist scenario of the future may end up looking ugly with the northerner at the helm. Poverty leaves its mark. The greed that erupts once we find ourselves with access to life-sustaining resources may end up depleting us. The nouveau riche of the North lacks perspective, and even though we have the means, we do not have the willpower or the ability, or the knowledge – because, do we really know enough about how to treat the nature that surrounds us? Caution is thrown to the winds. The crowning example of northern Norwegian greed must be this: selling whales to tourists in Tromsø year after year, even though the skipper knows that the whales are actually basking outside Skjervøy.

One of the bright brains of Bodø, city of seagulls, expressed it rather eloquently at the time of the bitcoin-hysteria in August: “what on earth is wrong with us northerners; every time a rich foreigner shows up, we act like it’s our very last chance”. Every time a cruise ship shows up. Or a plane, carrying 250 people who want to experience authentic, small town idyll. “Sorry, we cannot oblige” is a possible answer, too.

«Visit us, visit us, Visit Bodø, we have northern lights and beautiful sunsets» the seagull cries with vigorous enthusiasm, shaking its head in relief that it cannot dive. Knowing it won’t have to see what it doesn’t want to see, there, under the surface.