Skip to main content
- To believe that climate change does not affect those of us who live in the North is equivalent to denying the actual existence of Elvis, Helge M. Markusson, Outreach Coordinator at The Fram Centre, writes in this commentary. 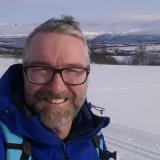 To believe that climate change does not affect those of us who live in the North is equivalent to denying the actual existence of Elvis. But how does it affect us? It is time to draw up the big lines.

Are you in doubt? It is actually happening as we speak.

Climate change is not an invention from scientists and politicians who have nothing better to do but write applications resulting in millions of kroner. Like it or not, feel free to discuss whether it is man-made or not, but just take it in. We live in a time when climate change affects how we live.

We who live in the North will meet particularly significant challenges in the future. Our way of life and our livelihoods have been, are and will still be closely attached to nature, which again forms a vital foundation for cultural and social identity. For instance the Sami populations, but also for other local communities in towns and villages.

There is a lack of knowledge about how indigenous peoples historically have adjusted to variation in local climate conditions and resource bases. This is an argument the scientists meet over and over again:

- Why spend time and money on these changes when we adjust anyway?

Because we lack knowledge about whether it takes a new form of adjustment, or whether the current adjustment strategies are sufficient to meet the new climate conditions.

Everything is connected. The effects of changes to ecosystem changes in the northern landscapes will have far-reaching consequences. If the plains (tundra) is overgrown with bushes and trees, this may have reflexive connection effects on the global climate system that accelerates the warming.

That will have consequences for how we live in the north. The cloudberry, the grouse hunting, the open plains; everything runs the danger of being covered by forest and grass.

How fast and to what extent this may happen are vital research questions receiving wide international interest. Are there counter-measures available?

Grazers, both wild and tame, can help limit the development of vegetation in the High North and scientists are currently considering whether rational grazer management plans can exploit this.

A long list of species may become so rare that they may end up on ‘the red list’ as their natural habitats shrink, their nutrition resources disappear and new competitors and enemies encroach from further south. How do we deal with that?

The administrative authorities need a running update on which species and kinds of nature that end up in the danger zone, which causal effects are in play and what opportunities there are for rational managerial measures.

Human activites like fishing, aquaculture, shipping, tourism and recreation significantly affect fjord- and coast eco systems. The northern coastline is also affected by species that have not previously lived here, e.g. the red king crab, which was brought here by humans. Large parts of the coast is used for habitation, port facilities, industry and farming. The coastal waters are thus on the receiving end of land-based runoff where the runoff comes with environmental poisons and high concentrations of nutrients.

Now we are also facing the effects of what a near-unison group of scientists considers to be man-made climate changes. Higher sea temperatures, changes in land runoff and new wind patterns may have dramatic effects for species that are vital for the function of ecosystems as well as their capacity as resources.

Natural climate variations are important for productivity in the fjord- and coast ecosystems. Man-made climate changes may lead to intensified effects of existing pressures.

Let us go even further north, to the Arctic, to the real Arctic, and not just the land north of the Arctic Circle: The reduction in extent, thickness and age of the Polar Ice Cap is a visible result of the climate changes.

And don’t bring me some random theory you have found on YouTube, made by a climate sceptic. The current development has been predicted by global climate models, but the speed has been faster than the models predicted. That is just how it is!

The Polar Sea ice holds high significance for the global climate system and for the climate in the northern hemisphere. Knowledge about the sea ice thus matters both for global climate negotiations that aim at limiting the temperature increase as well as for regional adjustments to the changes that will come.

The mackerel has reached Svalbard. Changes to the ice conditions is expected to create significant changes in the eco systems. Scientists already see a northwards extension of several species’ habitats. However, what is not certain yet is whether the productivity of the Polar Sea will increase when the ice withdraws and the water gets warmer, to what extent the primary production will be channeled into commercially viable fish species, and where potential new fisheries may take place.

Another vital effect of the polar ice withdrawal is that areas that have formerly been more or less unavailable are now becoming more open for commercial business exploitation. Oil, cruise, fisheries and mining.

It is happening now

It happens now, it happens in the north, and it is of our business. Registration of meteorological data started in Longyearbyen, Svalbard in 1911.  There has not been a warmer year than 2016 since registrations started. The warmest day of the year was July 3, reaching 14.5 degrees Celsius.

However, what worries the scientists is the fact that October measured 10.1 degrees C, 6 degrees C in November and 4.8 degrees C in December. These are months where the norm would be freezing cold weather, often 20 degrees below zero.

The numbers crush all earlier registrations.

Svalbard society is exposed to mudslides and avalanches in a different and far more dramatic way than ever before in known history. Most would argue that climate change is the main cause thereof.

And when the ice melts in the Arctic, the ocean will absorb more solar radiation and sea temperatures will continue to increase.

The scientists are clear: This will also affect temperatures in mainland Norway and the rest of the High North.

Potential objections to this comment will be filed in the same place as those regarding doubts about whether or not man has been on the moon and whether or not Elvis ever lived.