Frigg Jørgensen, executive director of AECO (Association of Arctic Expedition Cruise Operators), comment on the recent and very unfortunate incident in Svalbard where a polar bear was killed in self-defense after attacking a man from a cruise vessel. 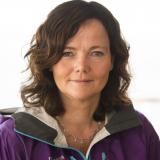 A recent and very unfortunate incident in Svalbard where a polar bear was killed in self-defense after attacking a man from a cruise vessel has engaged a lot of people around the world. The international media has given the incident considerable attention, and people in general are very engaged through social media.

Most of the attention has been focused on the bear, and many have criticized the operator for bringing tourists to this part of the world. An online petition asking people to boycott the tour operator involved in the incident has already collected tens of thousands of signatures. Surprisingly few have shown any interest in or concern for the injured man or others involved in the incident.

Polar bear conservation is a topic worth getting passionate about. The Arctic expedition cruise industry cares deeply about the protection of Arctic wildlife and operates under a strict principle of non-disturbance. However, some essential facts seem to be missing from the debate. Some of the criticism has been directed at Norway’s management of polar bears. It is important to keep in mind that Norway has signed the Polar Bear Agreement and, unlike some other Arctic countries, have banned polar bear hunting in Svalbard. According to numbers compiled by Ole J. Liodden in WildPhoto, 7500 polar bears have been killed in Canada, Alaska and Greenland in the ten-year period between 2007 and 2016. In the 45 years that have passed since the polar bear became protected in 1973, 131 polar bears have been killed in Svalbard, almost all of them in self-defense. Out of the 131 shootings, 50 bears, or almost 40%, were killed by scientists or field stations residents. Since in 1973, 15 polar bears have been killed in incidents connected with tourism. The great majority of cases involved people on private skiing expeditions and campers. In 45 years, two bears have been killed in connection with landings from cruise vessels and one in connected with a landing from a yacht.

Two dead bears in 45 years may not be a high number, but it is still two bears too many. It should not have happened, and the expedition cruise industry as a whole very strongly regrets that it did. Still, it was an emergency situation where human fatalities would have been the alternative. In this case, the person suffered moderate injuries before the bear was fended off, but this has not always been the case in Svalbard. There have been tragic deaths following polar bear attacks. Even if the injuries were moderate, the people involved will be marked by this incident for the rest of their lives. Not only have they experienced a trauma, they have also had to execute actions they truly wanted to avoid.

Some has raised criticism toward expedition cruise staff and implied that polar guides lack competence. In the case of responsible Arctic expedition cruise operators, this could not be further from the truth. One of the hallmarks of AECO’s members is their staff is highly educated, specially trained and have extensive polar experience. Staff are tested, certified and regularly trained, including on polar bear safety. Polar guides and expedition leaders are often people who have been drawn to this industry through their strong interest in nature and the environment, and many of them are actively involved in nature conservation efforts.

Some have claimed that expedition cruise passengers are world-weary millionaires who only care about ticking items of their bucket lists. This description completely misses the target. Expedition cruising attracts all kinds people, and you will find people of all ages and nationalities and from different walks of life. These people have travelled to the Arctic to experience its unique natural environment, wildlife and history and are generally eager to learn more about the areas they visit. Through their own experience and the efforts of skilled and engaging expedition leaders, guides and lecturers, they learn about the Arctic today and how it is developing. They see with their own eyes the effects of climate change and marine plastic pollution on the Arctic environment.  They are invited to pick up litter that have been brought to Arctic beaches from other sources, mainly fishing industry in other areas. They see how the glaciers withdraw from global warming, how environmental toxins affect birds and animals, and how a warmer climate allows non-native species to strike root in the Arctic.

Most expedition cruise tourists in the Arctic have a burning desire to protect the environment. While traveling in the Arctic, they engage in beach cleanups, citizen science and submit wildlife observations that are used in science. Both passengers and operators make significant donations to environmental and conservation organizations.

Experiencing the changing Arctic affects people. It makes them want to engage and act. This is how we create ambassadors and people who are willing to take actions to preserve the Arctic, and the environment in general. Restricting the public’s opportunity to experience the Arctic is to rob ourselves of the best tool we have to preserve the environment: people’s interest, knowledge and engagement.

The unfortunate polar bear incident gives reason to evaluate the current state of affairs. Examining which requirements should apply to the tourism industry should be part of these discussions. However, denying people the chance to experience the Arctic should not be up for discussion. Polar bears are present all over Svalbard and can be encountered anywhere and at any time. Several well-known migratory paths cross central parts of Spitsbergen and polar bears are observed in and close to settlements numerous times every year. As long as the Arctic is the home of people and human activity, people and polar bears have to coexist. However, the tourism industry and authorities will continue the work to ensure that we are doing everything in our power to avoid conflicts between the two.